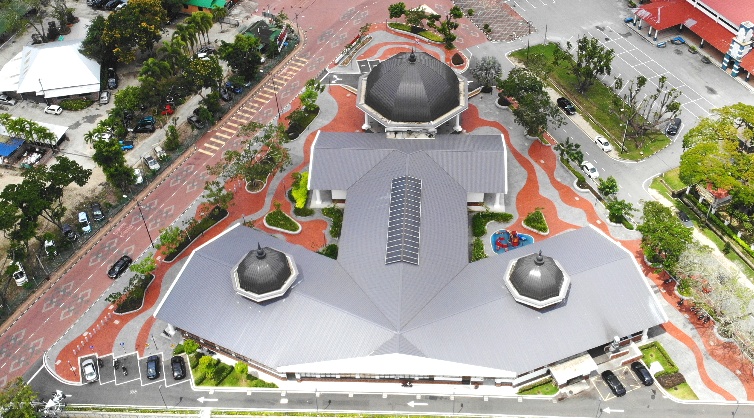 Mersing's latest architectural addition, Mersing Harbour Centre, was recently completed, to the collective joy of not only those employed by the regional tourism industry, but also of course tourists themselves.

The majestic building, officially opened by none other than the Sultan of Johor, represents a quantum leap onward and upward from the old Mersing ferry terminal. Gone are the days travellers had to shuffle their way through the throngs of ferry ticket hopefuls in order to get to the archaic ticket counters. In most cases, holiday-makers wouldn't even know the ferry had any availability left until they managed to reach the ticket counter. A far cry from the easy travelling portrayed in the glossy brochures.

Not only is the Mersing Harbour Centre complex a breath of fresh air in terms of space, comfort and convenience, but it also enables travellers to book their ferry tickets in advance, i.e. online. They can then be collected at the dedicated ferry ticket counter, counter 21.

This means that countless of Tioman visitors can breathe a huge sigh of relief, given that now when they reach Mersing, they know for a fact they'll be able to catch the ferry to their resort. No more FUD. Well, at least for the ones that had the presence of mind to book ahead.

The best part, however, of Mersing Harbour Centre, is that it offers a number of other tourism-related services that previously could only be had from separate sources, resulting in tourists with an eye on visiting the area having to scour countless third-party websites endlessly in order to find their resort, activity or service of choice.

Need to book an accommodation for your upcoming Tioman vacation that also has snorkelling and scubadiving nearby, as well as a jungle trekking outfit? Just head for Mersing Harbour Centre, either the physical version of the online one, on www.mersingharbourcentre.com. You'll be able to window-shop, compare and contrast and then book all of your requirements, all under the one single roof. A big terimah kasi to the Mersing tourism department that recognized the need for renovations.

Mersing Harbour Centre incidentally also caters to the other paradise islands that dot the Mersing seaboard, such as Rawa, Sibu, Aur and others. Keen to island-hop some of the nearby tropical castaways isles? Or perhaps you've always wanted to live out your Tarzan fantasy in an untouched tropical rainforest. In fact, even if you just want to book a bus or taxi to Mersing from Singapore or Kuala Lumpur, Mersing Harbour Centre will see you right.

How to get to Mersing Harbour Centre

If after all this talk of holidaying and tropical islands, you want to book your ferry ticket to, say, Tioman, then you can do so on the ferry's online portal: www.tiomanferry.com. Please note that Tioman ferry times are dynamic, so keep that in mind when going to Tioman and returning to Mersing.

Clearly, Mersing Harbour Centre is poised to become a comprehensive boon to Mersing, indeed it will doubtlessly enable the whole area to benefit from the forward-thinking government that foresaw the versatile complex's unequivocal added value.